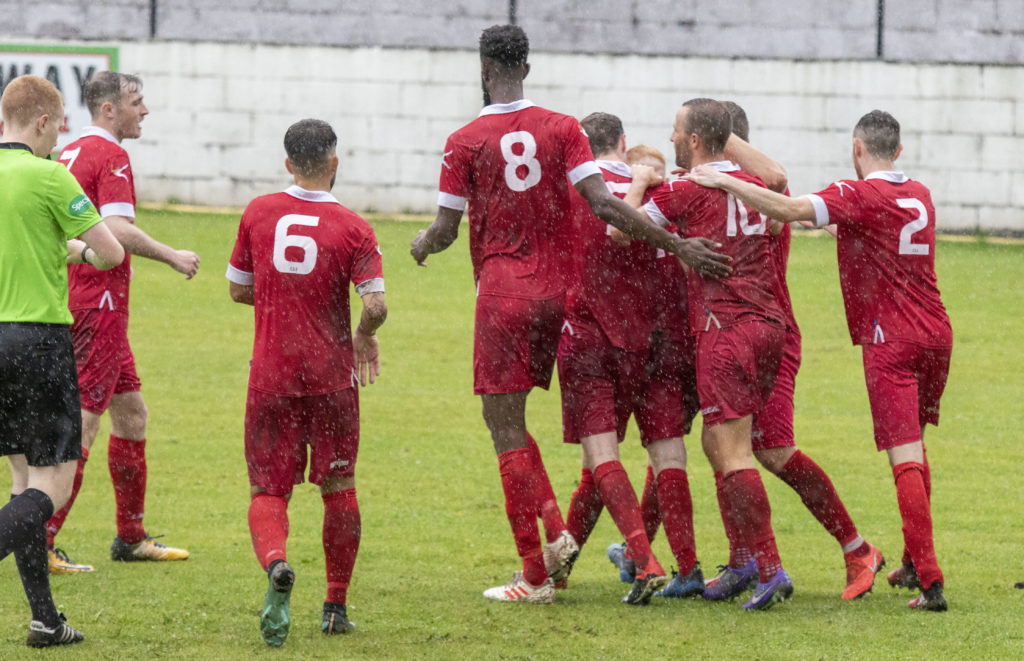 The visitors, who fell to their sixth straight defeat in all competitions, will now be looking to regroup ahead of next week’s 6-pointer against bottom side Vale of Leithen. For Civil, after well taken first half goals from Alieau Faye and John Dunn, the win was finally secured with Scott Clapperton’s impudent cross-cum-shot midway through the second half.

It was an-uber professional performance from the Strollers who controlled possession for long periods and never looked like slipping up against the struggling University side – despite the miserable weather that once again blew through North Edinburgh. The temperature gauge recorded that it was 4 degrees centigrade – but with a strong northerly breeze it felt a lot colder pitchside.

Not that Civil looked too affected by it. The University side couldn’t put Civil under any pressure on the ball, and Strollers took advantage as they played some great football out from the back. Craig Newall was busy early on, driving at opponents – and the midfield trio of John Dunn, Andy Mair and trialist Archie Roue were full of give and go passing and movement, safe in the knowledge that Scott Clapperton was patrolling in behind them if required.

Ryan Shanley tested Kieran McDougal early in the Uni goal with one long range snapshot, and Andy Mair hooked over shortly after, before Civil opened the scoring on 21 minutes. Alieau Faye timed his run to perfection, picking up Ryan Shanley’s precision lay off, and with McDougall momentarily hesitating to come off his line, he calmly stroked the ball past the keeper and just inside the near post.

The lead was doubled on 36 minutes when Andy Mair sprinted onto Archie Roue’s through ball, outstripped the defenders and looked set to score. His strike was well saved by the outstretched boot of the Uni keeper, but it fell at the feet of John Dunn who for the second week in a row, slotted home from the edge of the box.

Roue nearly added a third just before half time – beating two men, and firing in a dipping drive that McDougall pushed to safety.

The Uni side only showed flashes in response. One defensive slip by Civil was prodded goalwards by Louis Maurice, and Josh Donaldson had to be sharp to push it round it the post.

Luke Murray always looked a threat with his set pieces – particularly in the first half when the wind was adding further bend to his back post deliveries. And Mark Waters was lively – forcing Donaldson into one diving save at his feet as he tried to get onto a routine long ball upfield; and swinging one cross to the back post that Donaldson had to tip wide as attackers followed up.

But Civil put the game to bed as a contest when Scott Clapperton looped a teasing ball across goal from just inside the edge of the Uni box. It sailed over everyone and nestled in the top corner. If intended, then it was Cantona-esque.

After that Strollers started to experiment a little. They practiced some neat training ground corner routines, and even brought central defender Shaun Turnbull on, after a long injury absence, as an experimental centre forward.

There could have been more goals. The University cleared one wind-assisted John Dunn corner off their own goal line, and another bending cross from Roue was nearly prodded past his own keeper by Uni defender Stuart McFarlane.

Iain Ballantyne, another late sub for Strollers, slid one chance wide, and had another long range effort pushed round the post.

The game closed with the Uni having perhaps their best chance of the game – again Mark Waters was involved, skipping past a couple of Strollers before hammering the ball just over.

Next up for Civil is another home game against Berwick Rangers, before a burst of big, season-defining games that will give us a good idea of how this side fits into the Top 6 – away at Bonnyrigg Rose and Spartans, followed by games at home against BSC Glasgow and Kelty Hearts.