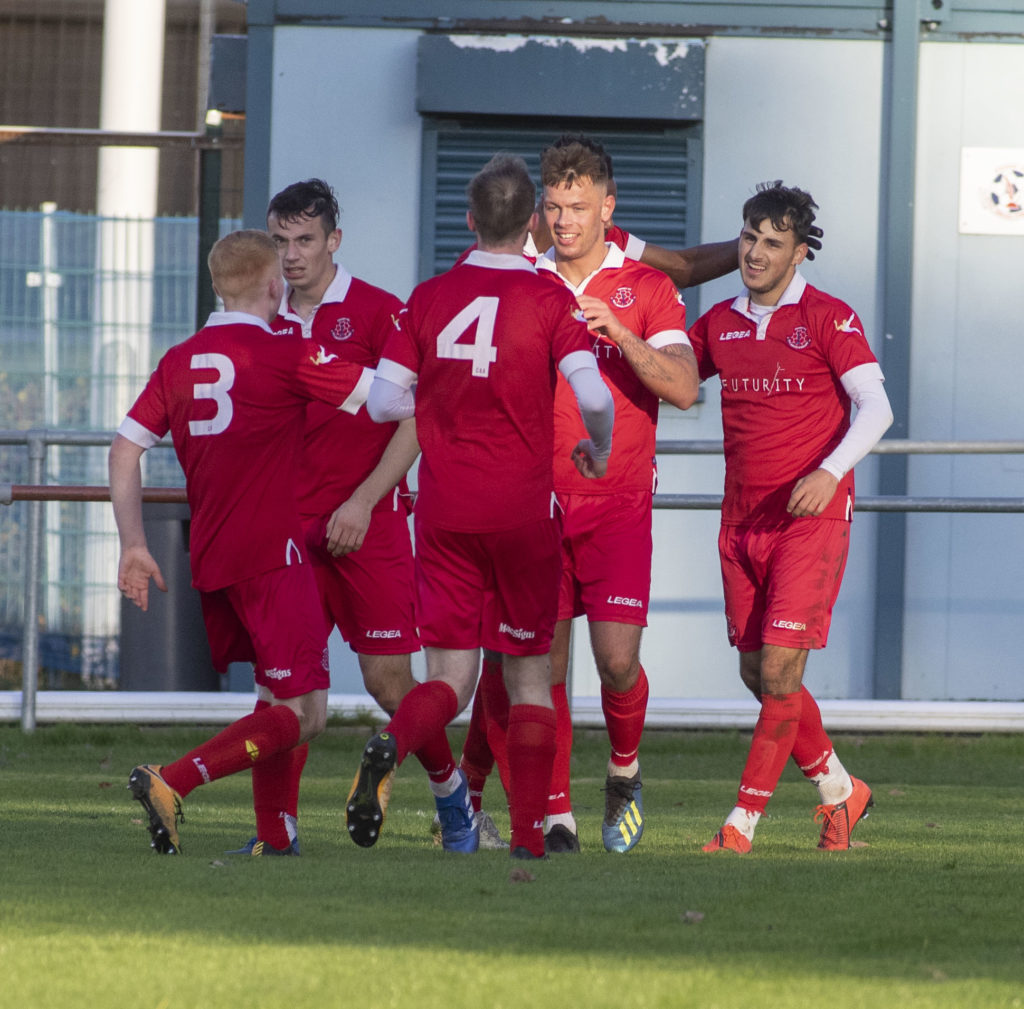 On an historic night for the club, playing a competitive game under their newly installed floodlights for the first time, Civil Service Strollers couldn’t live up to their bright start as Hill of Beath Hawthorn came from behind to take an ultimately deserved win and put their name in the hat for the third round of the Football Nation Cup.

In what turned into a slightly tetchy affair, played out at a frantic pace on a bitterly cold night in North Edinburgh, the Strollers struggled to find any rhythm against their East of Scotland League opponents – who gave the home side fair warning of their giant-killing credentials having beaten another Lowland League side, Cumbernauld Colts, in the South of Scotland Cup just four days earlier.

The home side got off to a dream start though – Cammy Muirhead, continuing his rich vein of recent goalscoring form, grabbed his fourth in three games. A misjudged back pass from the Hill of Beath midfield was pounced on by the Strollers number 9 who held off one defender and calmly took the ball round the stranded keeper to stroke into the empty net with barely two minutes on the clock.

But the early mistake was not repeated and thereafter the visitors spent much of the game defensively stifling anything Civil had to throw at them. They levelled on 8 minutes – Calum Adamson played a neat 1-2 on the edge of the Strollers box after Civil had failed to clear their lines, and drove a sharp finish that Josh Donaldson got a hand to, but couldn’t keep out.

The winner, when it came in the 71 minute, was a lovely close range finish off the underside of the bar by substitute Joe Kinninmonth, a goal which felt like it was coming following a period of concerted pressure by the Haws. They had other chances and could have grabbed a third in the last minute – spotting the Strollers keeper off his line, the Hill of Beith midfielder floated an effort goalwards from a full 30 yds out, but the backtracking Josh Donaldson brilliantly managed to claw the ball to safety.

In reply the Strollers only showed occasional flashes of the quality that has seen them rise to within touching distance of the Top 3 in the Lowland league. Ryan Shanley looked the player most likely to unlock the opposing defence, and the link up with Callum Yeats behind him and Muirhead ahead was the source of most of the Strollers best moments. Given a license to drift in from the left, one glorious clipped through ball midway in the first half released Muirhead to burst past his marker and into the box. He looked set to grab his second, before the Haws backline closed in, and under pressure he poked the chance wide.

In the end most neutrals would give huge credit to Hill of Beath Hawthorn for a solid defensive performance that rarely allowed any Civil player the time to settle in possession. They always appeared to have extra men behind the ball and Civil, for all their industry, just couldn’t find any gaps. On the rare occasions that Civil were able to fashion a half chance – including a late jinking burst into the box by Jack Hodge – the Haws were willing to throw their bodies in front of the ball. It’s perhaps telling that the home side didn’t force the Haws keeper into a single save of note after they scored in the second minute.

The Strollers don’t have long to wait for the chance to make amends. With just a three day turnaround, next up they travel to another of the Lowland League’s form teams – BSC Glasgow – for Saturday’s eagerly anticipated clash at Indodrill Stadium.