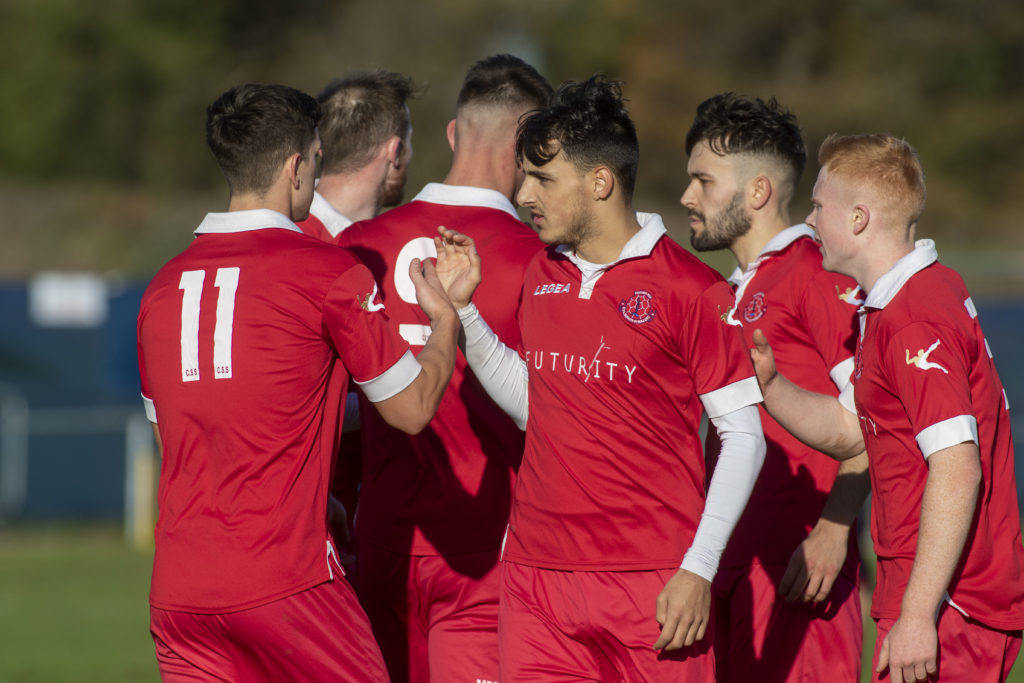 A goal in each half from Cameron Muirhead, coupled with a fifth clean sheet of the season, was enough to give the Strollers the points against a spirited Caley Braves side, writes Bernie Regan.

Muirhead, in imperious form all afternoon, was unlucky not to grab the hattrick his performance deserved – but his stoppage time strike, after a burst through the middle from Andy Mair, grazed the outside of the post as it unfortunately slid wide.

The visitors will feel they more than matched their hosts in the first half, but then faded after the break, and despite Strollers finishing the game with 10 men – Ryan Shanley picking up a second yellow for an innocuous looking tangle on the half way line with 3 minutes to go – by then the game was settled. Civil, not for the first time this season, reacted positively to Gary Jardine’s half-time wisdom and were much improved in the second half.

But Caley Braves definitely shaded the opening stages of the game, and should have taken the lead after 5 minutes – Ben Daily blazed over from 6 yds out after Civil failed to deal with a corner, and a game of head tennis saw the ball land at the feet of the Caley number 10.

The opening goal, when it came, was definitely against the run of play. Strollers had a rare foray forward and switched play from left to right. Jack Hodge fed the ball to the tireless Craig Newall on the overlap and his cross to the back post hung in the air for what seemed like an age before being nodded home as Muirhead rose above his marker.

For the rest of the half Caley Braves carved out the better chances. Dom Slattery headed a good opportunity wide just before the half hour and Lewis Lovering also couldn’t quite get on top of another headed chance served up by playmaker David Sinclair.

The best chance of the half again fell to Ben Daily who muscled in from the left byline on 35 minutes and from an acute angle flashed a low drive across the face of goal and just wide of the far post.

After a frantic start to the second half, Civil started to take control. Craig Newall put one cross/shot onto the roof of the net. Ryan Shanley turned and hammered a drive in from fully 30 yards that was just wide left. And Alieau Faye had two good chances in the space of a few minutes – the latter after the Strollers had put together their best passing move of the game.

The game took its decisive turn on the hour mark. Civil got caught trying to pass the ball out from the back, and the Braves nipped in leading to almighty scramble in the Strollers box. Caley pushed players forward and several flashed at the ball as it pinballed around the box. The Strollers defence simply threw bodies at the ball. It felt like an equaliser was imminent, but in an instant the ball ricocheted out to Ryan Shanley midway in his own half. The youngster controlled the ball, turned and immediately put the burners on, carrying the ball half the length of the pitch before slipping the ball to Muirhead who timed his run to perfection, tripped the offside trap, and then – calmness personified – stroked home his 6th goal of the season past the onrushing Nicky Hogarth.

Caley Braves still carried the occasional threat – particularly through Ross McNeil whose direct running down the right was testing the defensive mettle of Andy Mair and Callum Yeats. The Braves top scorer thought he had pulled one back on 66 minutes with a sharp flicked finish – but was called narrowly offside.

But the Strollers ended the game the stronger and also welcomed back Jack Downie and Josh Morris, who both made late substitute appearances as they return from injury.

Next up Strollers go on the road to bottom-of-the-table Vale of Leithen, before a mouthwatering clash back at Christie Gillies Park against fellow high-flyers, BSC Glasgow.