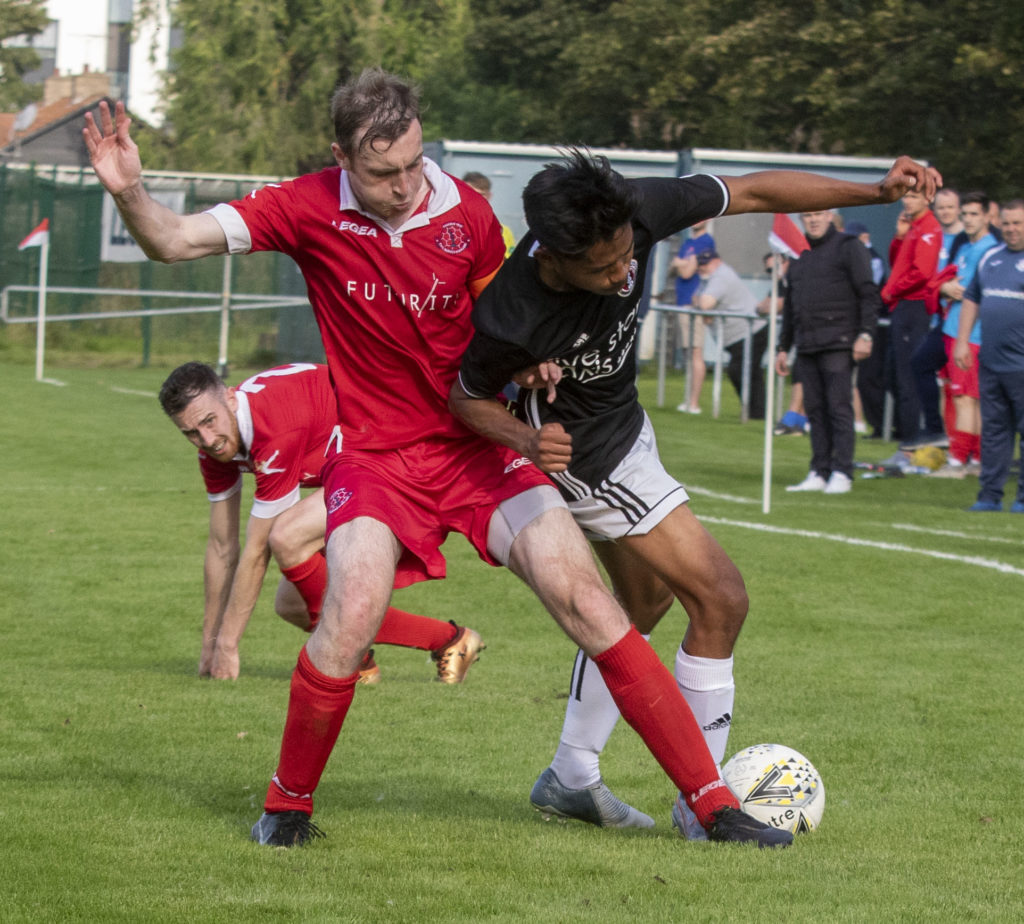 Civil Service Strollers had to settle for a point at a baking hot Christie Gillies Park, as visitors Gala Fairydean Rovers twice came from behind in this evenly contested 2-2 draw, writes Bernie Regan.

Civil shaded proceedings in the first half and should have had more to show for their efforts than Downie’s third goal of the league campaign. Craig Newall was a constant threat down the right hand side, and his deep cross in the third minute hit Downie whose finish was gathered at the second attempt by a sprawling Fraser Morton in the Rovers goal. But the Civil striker made no mistake five minutes later. Cammy Muirhead did the hard work, exchanging a give and go on the edge of the Gala box that opened up the visitors backline, before unselfishly giving his striking partner the easiest of back post tap-ins.

Scott Clapperton was quietly effective in patrolling the midfield and Civil’s front six were stifling a Gala side too often guilty of getting caught trying to play elaborately out from the back. Downie came close to doubling his tally on 20 minutes – again Muirhead worked tirelessly to win the ball in Gala territory and fire over a cross that the number 10 headed just over and onto the top of the net.

Civil’s best move of the game came just inside the half hour mark as Callum Yeats instigated a burst of quick give-and-go passing with Clapperton before switching the ball from left to right where Craig Newall arrived to deliver another testing cross that Muirhead threw himself at, but Rovers somehow managed to clear their lines.

But Gala burst into life in the last 15 minutes of the half – with Yrik Galentes having a spell of mazy, jinkling dribbling that pulled his side level on 37 minutes. His run and pinpoint cross from the left looked like it would be swept home at the back post by Mendes Yafa, but was unfortunately deflected into his own goal by a lunging Scott Main. Moments later Galentes nearly scored himself after another trademark run and finish – but Stuart Burnside’s outstretched foot just poked the goalbound shot wide. Civil were forced to make a change at half time – Josh Robertson looked shaken when he collided with the Gala keeper right at the end of the first period, and he didn’t appear for the second half, with Jack Hodges coming on in his place. He immediately got in on the action with a sharp pick up and shot from all of 30 yards that went well wide. But his next action, just after the hour mark, saw Mark McConnell restore the Civil lead, the Civil midfielder outmuscling the Rovers keeper and flicking home Hodges dangerous inswinging cross.

Muirhead nearly added a third – again Newall’s delivery was key, and Muirhead’s glancing header was excellently tipped over by Fraser Morton. But instead Gala got the equaliser when an error by Civil stopper Stuart Burnside was bundled home by Scott McKenzie. Burnside more than made up for it moments later when he tipped over a certain goal for Rovers.

There was still time for both sides to win it. With 5 minutes to go Civil hit the post, after a flowing move forward involving 4 or 5 players. Gala burst back, with Ben Herdman looking a threat at every set piece. And with the final kick of the came Jack Hodges found Jonathan Devers in space in the box, but his drive whistled just over.