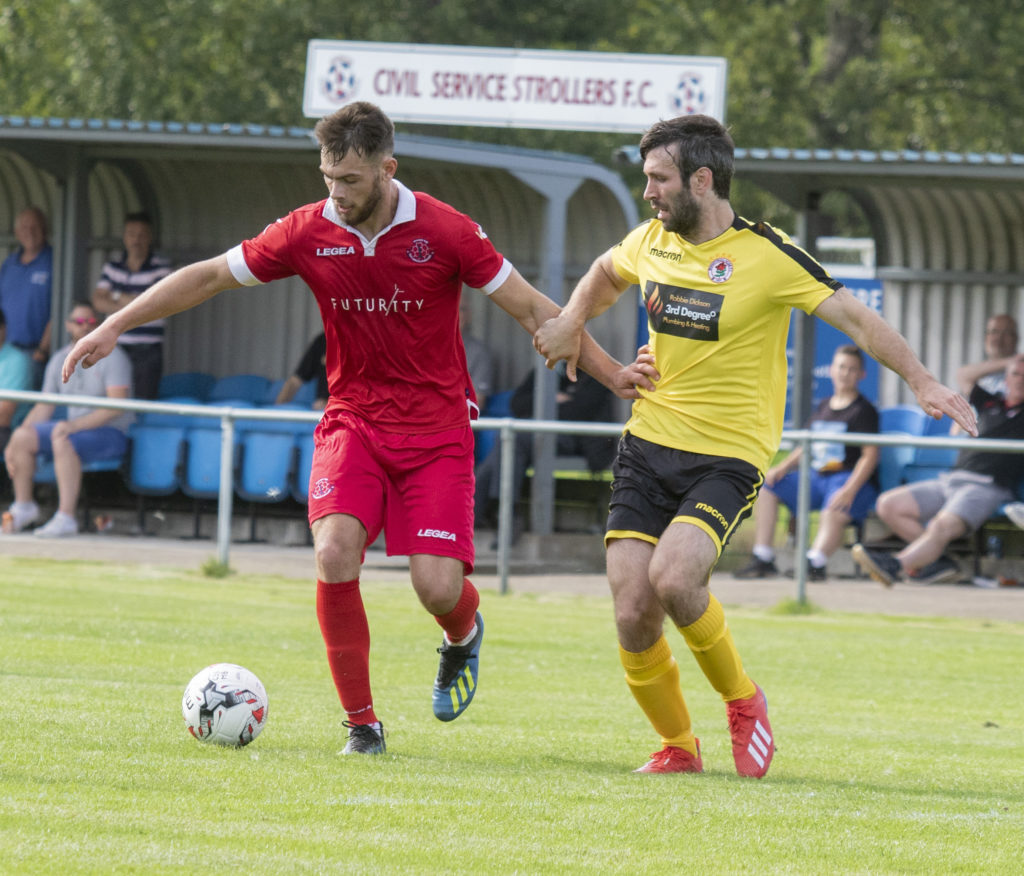 It was honours even at Christie Gillies Park, as two of the league’s early season pace-setters served up a hugely entertaining 1-1 draw, which burst into life late in the second half. Bonnyrigg’s Kerr Young powered home a late late header, to cancel out Andy Mair’s smartly taken opener on 53 minutes, writes Bernie Regan.

In a frantic end-to-end finale both sides had chances to grab the winner in stoppage time – Civil having a goal disallowed for a very tight offside call, before Bonnyrigg went straight down the other end and looked certain to score, but the otherwise excellent George Hunter drove the ball just the wrong side of the Strollers upright. There was even time for a late red card – Civil’s Alieau Faye picking up a second yellow for kicking the ball away as time ran out.

Coming into the game, all eyes were on how Civil’s smothering defense would shape up against a Bonnyrigg side that had struck 11 goals in their two previous fixtures. By half time, the Strollers back line had made their case – putting in another stout performance that limited their opponents to just a handful of half chances.

In fact going forward it was Civil who fashioned the better opportunities – Cammy Muirhead slid one just wide on 5 minutes, and almost capitalised on a shanked clearance from Bonnyrigg keeper Mark Weir on 17 minutes, but a heavy touch as he bore down on goal allowed the keeper to make amends. The best chance of the first half came from another miscue from the Bonnyrigg keeper, who drove a clearance into the onrushing Andy Mair on 32 minutes.

The ball rebounded to Jack Downie, who spotting the keeper off his line opted for precision over power, and put his deft chip just onto the roof of the net.

Despite all this, and roared on by a raucous travelling support, Bonnyrigg Rose came out for the second half with a point to prove. They carved out two good chances in as many minutes at the start of the half – the powerful Kieran McGachie heading over when well positioned at the back post, before again winning an aerial ball to set up Scott Gray who blazed over.

Moments later they thought they had a penalty – Hunter cutting in from the left went down in the box, but the ref waved away the appeals. As the players and fans remonstrated with the officials, Craig Newall carried the ball forward for Civil on a surging run that took him deep into Bonnyrigg territory. His slide rule pass to Andy Mair was perfect, and the winger cut in from the left before hitting a low angled drive beyond the keeper and into the bottom corner to give Strollers the lead.

The goal seemed to spur Bonnyrigg into life, and for much of the remainder of the second half, they laid siege to the Strollers penalty box. On the hour mark they should have scored, but Stuart Burnside pulled off a brilliant point blank save to deny a Lee Currie piledriver.

They still had time for another penalty appeal for a tug on Hunter, before their pressure finally paid off, and Kerr Young – up from the back to add to their aerial firepower – got on the end of a deep cross to head home the equaliser.