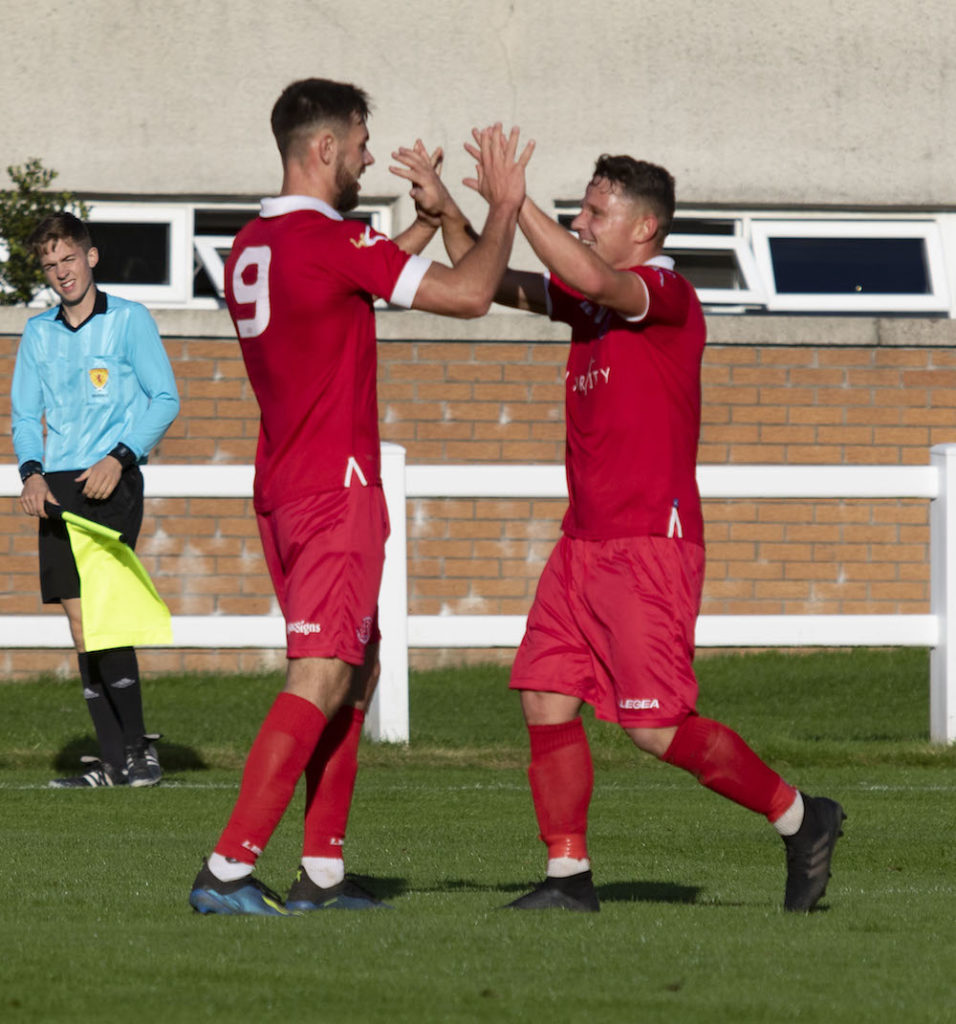 In reply Edinburgh Uni briefly levelled it at 1-1 – the goal giving the home side some hope that they might snatch an unlikely result. But for all their energy and endeavour, Stroller’s keeper Josh Donaldson had little to do and it was only from set pieces late on that the Uni side looked capable of troubling the visitors.

Strollers will be happy that their first half showing – where they dominated possession but failed to capitalise on a number of good chances – didn’t come back to haunt them.

In one five minute spell just after the half hour mark, Ryan Shanley cut inside from the left hand corner of the box, and curled a lovely strike onto the bar. Moments later from the other side of the box, Shanley was at it again, turning his marker inside out before blazing over when well positioned. Jack Hodge was next up with a chance to score when the ball broke to him unmarked on the edge of the box. Advancing on goal, but with more time than he realised, he dragged his shot wide of the left hand upright.

In reply, Edinburgh University came closest on 5 minutes when a Luke Murray free kick caused an almighty scramble in the Strollers 6 yard area – and Donaldson was called into his only significant action of the half, pulling off a point blank save to deny the students the lead.

Thereafter, the home side struggled to find any way through the Strollers backline, well marshalled once again by captain Kyle Fee – and the Uni side’s continued willingness to try and play out from the back, when faced with a Strollers side intent on a high press, too often put them into trouble in their own half.

It was from such a mistake that Civil took the lead. With barely a minute of the second half gone, Robbie Sinclair attempted a crossfield pass near the half-way line, but Ryan Shanley read it, and instantly funneled the ball through to Cammy Muirhead. The striker showed everyone what composure looks like, calmly advancing on goal and slotting home with the minimum of fuss.

But against the run of play, the sides were level. Another dangerous corner from Luke Murray sailed beyond everyone except Stuart Macfarlane at the back post, and his smart headed pull back was swept home through a crowd of players by sub Patrick Baird. It was only Edinburgh’s fifth goal of the campaign, a tally that is the joint lowest in league to date.

Strollers then hit back with the goal of the game seven minutes later. Craig Newall showed quick feet and burst into the box down the right hand side, but was crowded out by three defenders. It looked like the danger had passed, but the attempted clearance simply landed at the feet of Jack Hodge 25 yards from goal. He instinctively hammered the ball back in, his powerful drive proving too strong for Kieran McDougall, and Strollers were back in front.

At this point the Uni side threw caution to the wind, bringing on Louis Squires and Louis Maurice and pushing bodies forward. Aided by a Strollers side who kept giving away niggly free kicks in dangerous areas, the home side then had their best spell of the game – Ross Watters was driving his team on, and Luke Murray’s set pieces were causing some serious problems for the Civil backline.

But as so often before this season, they held out, and finally put the game to bed when Cammy Muirhead grabbed his second – a near carbon copy of his first – after Alieu Faye won the ball in the centre circle and slipped the through ball to the big Strollers number 9.

Next up, the Strollers are on the road again, heading to Broadwood Stadium for their midweek clash with Cumbernauld Colts.